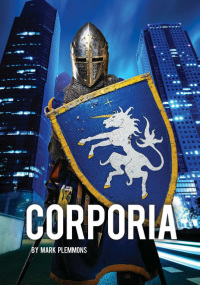 Featured Product! Corporia is a tabletop role-playing game of genre-bending fiction and futuristic urban fantasy written by Origins and ENnie award-winning author Mark Plemmons. In Corporia, you take on the roles of reborn Knights of the Round Table or their supernaturally-powered allies, fighting an invisible war for justice in the struggle between otherworldly Chaos magics and the oppressive Order of the ruling mega-corporations.

The goal of the original Corporia campaign on Kickstarter was to raise funds to publish a signed & numbered, limited edition hardcover, and distribute the books and other rewards to the backers. We reached our funding goal with enough of a bonus to add multiple 'stretch goals', and are pleased to say that the Kickstarter backers received their rewards on time (some were even early).

Corporia is now available in PDF and other digital formats at multiple online retailers (see the Products page). If you want to stay up to date with developments about Corporia and other projects, follow Mark Plemmons and Brabblemark Press with the social media links at the top of this page!

Brabblemark Press publishes genre-bending role-playing games and RPG products, and proudly features the Corporia and MASHED RPGs from Origins and ENnie award-winning writer and founder Mark Plemmons. Mark has over a decade of experience in the role-playing and hobby game industry, having also served as: writer, editor, art director, project manager, and/or graphic designer for the HackMaster, Aces & Eights, Adventures Dark and Deep, Baker Street, and Dungeons & Dragons-branded Kingdoms of Kalamar RPGs, multiple Dungeons & Dragons and Knights of the Dinner Table comic book series, and more. He is also available for consulting, editing, and other freelance projects.
Web Hosting by FatCow